We had 17 riders that started at Huntertown, including 4 women. For the ladies, it was their first century tour and they were determined to complete the full 100 miles. Our first 25-mile leg was to Woodburn. Several of the ladies decided they felt good and did a few long pulls. I must admit, I had concern for them surviving for 100 miles as they seemed to be working a little too hard too early. At the first stop, several of the ladies discussed their conditioning and all decided they would take the split ahead for the full century. The pace picked up with the aid of a nice tailwind on the second leg to Cecil. We all enjoyed the wonderful SAG provisions setup by Phil Snider and his family at the Cecil Park.

After a 15 to 20 minute break it was time to jump on the saddle for the third leg of the tour. The next 8 miles were delightful riding on a very smooth old U.S. 24 with wide shoulders. That and the nice tailwind made it seem like we were riding in heaven. As we made the turn back west at the Delaware Bend, the reality of the next 42 miles hit us in the face, a nice little crossing headwind. A few miles into the wind Bill blew a tire. It sounded like a firecracker. The blowout put two holes in his back tire. At that point the main group kept riding and 3 guys helped repair Bill’s tire. We put two boots under the holes, installed a new tube, said a prayer that it would hold and took off in a rotating single pace line trying to catch the main group. After a few miles we saw the group ahead, they decided to stop for a rest and wait for us. So at the metric century point we were all one again.

Riding west into the headwind on Jericho Road about 8 miles from Hicksville, one of the ladies had to stop for a break. I’m thinking, she is not going to be able to finish the ride. After some hydration and a breather, we headed for Hicksville at a slower pace. As we pulled into Hicksville for our last scheduled rest stop we were strung out in a long single pace line but still together.

After a few moments at the Hicksville stop, some of the guys said they wanted to ride ahead for the last 25 miles, so off they went. Steve Souers, Bill Lambert, another man and I decided that we would ride with the girls for the last 25 miles. A few miles west of Hicksville Steve yelled out glass. Thanks to Steve everyone else swerved to miss the glass, but Steve did not have enough lead time for himself. About 50 yards past the glass, Steve had a flat. Being a veteran rider, Steve suggested that I continue riding with the ladies and he and Bill would repair the tire and catch up with us. As we approached Spencerville one of the ladies asked what was that big white object ahead of us. I stated it was the Spencerville Covered Bridge. She said we must stop to look at it. As we turned onto the road to the bridge, Steve and Bill caught up with us. Steve pulled in with us and Bill kept riding as he had a hot date waiting at home. We did not see Bill for the remainder of the ride, but later learned that his rear tire finally gave out about 2 miles from his home, so the last two miles of his century were completed on foot. I was surprised the tire lasted that long.

Back at Spencerville, after admiring the covered bridge and a brief rest, three ladies, Steve and I were ready to spin to the finish. When we got to Coldwater Road Kim was dehydrating and cramping and started to fall off the pace. Steve, Marsha and Jan gapped Kim and me by about a quarter mile. I gave Kim the rest of my sports drink and asked her if she had 8 more miles in her. She said she was not going to stop at this point. Kim and I rode another 5 miles into the wind, keeping about the same distance behind the 3 riders ahead of us. As we made the turn south on old highway 3, Kim got a burst of energy and with a little help from a tailwind, we slowly ramped up the pace to 22 MPH for the last 3 miles, allowing us to catch up to the riders ahead of us as we came into Huntertown. On the north side of Huntertown the girls began the countdown to 100 miles. When we got to 100 miles all three girls yelled out a cheer as if they won the Indy 500.

Our century tour was complete. Not the fastest one that I had ever done, but likely the most rewarding, as I witnessed the excitement that Kim, Marsha and Jan, pictured below, experienced as they achieved the goal they set for themselves earlier that morning to ride a century tour. Prior to this ride, none of them had ridden more than 50 miles in one day. I congratulate Kim, Marsha, Jan and the other lady who finished a little later with her companion as we were driving out of the lot. 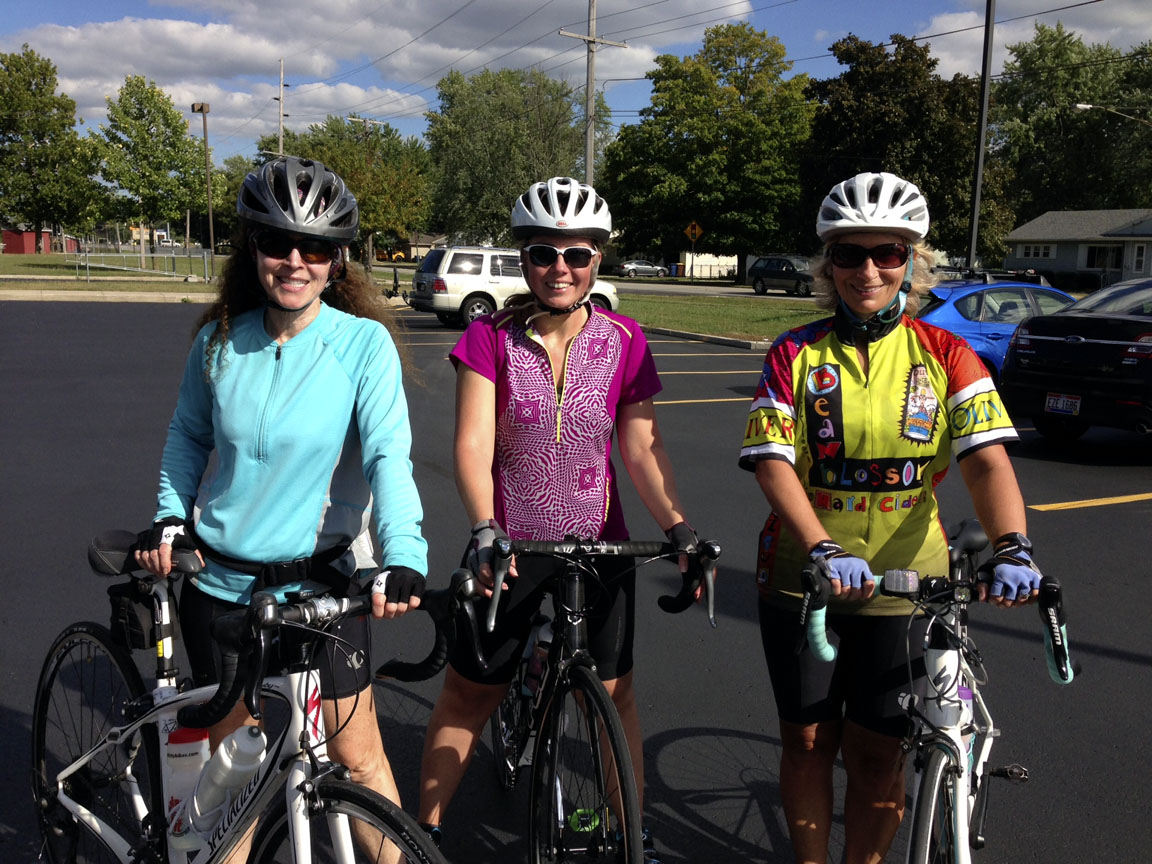