Every January, Three Rivers Velo Sport holds officer elections for the coming year. The terms for each of the nine offices is one year. With the club’s formation in 1969, five decades of club members have guided 3RVS and maintained continuity for cycling enthusiasts in our community. Good stewardship is not as glamorous as creating something new. Yet, without this kind of dedication, volunteer organizations crumble and fall away. This past month, four new officers were elected to the board. Such turnover is unusual with a mature organization that is running smoothly. I see the turnover as a sign of enthusiasm from new membership in the last few years.

Amy Copeland starts the list of introductions as the new membership officer. She started riding with the club several years ago and was known as a founding member of the S.L.O.W.E.R. riding group. Recently, she has lead 3RVS’s entry in the National Bike Challenge in the extra-large division the past two years. Her guidance lead to the club’s winning that category in 2015 and 2016. Also, Amy is co-ride leader for our Friday night City Tour. Her infectious enthusiasm has been a big plus for the club and as membership officer, she will interact with more members in the future.

John Grabowski started showing up on weekend club rides three years ago. Like many, he found his niche with group riding and his passion for the bike grew. Two years ago, he e-mailed me to offer the club a perk from his job: the opportunity to hold events at Sweetwater Sound at discount. John is the reason why the 3RVS End of Year Party is at Sweetwater. Also, John has volunteered as “B” group ride leader on weekend tours. A frequent attendee to our monthly meetings, John has shown an interest to the routine workings of the club. This year, he has stepped up as our new club secretary. The history of the club is written by the secretary and I trust John will do a good job. 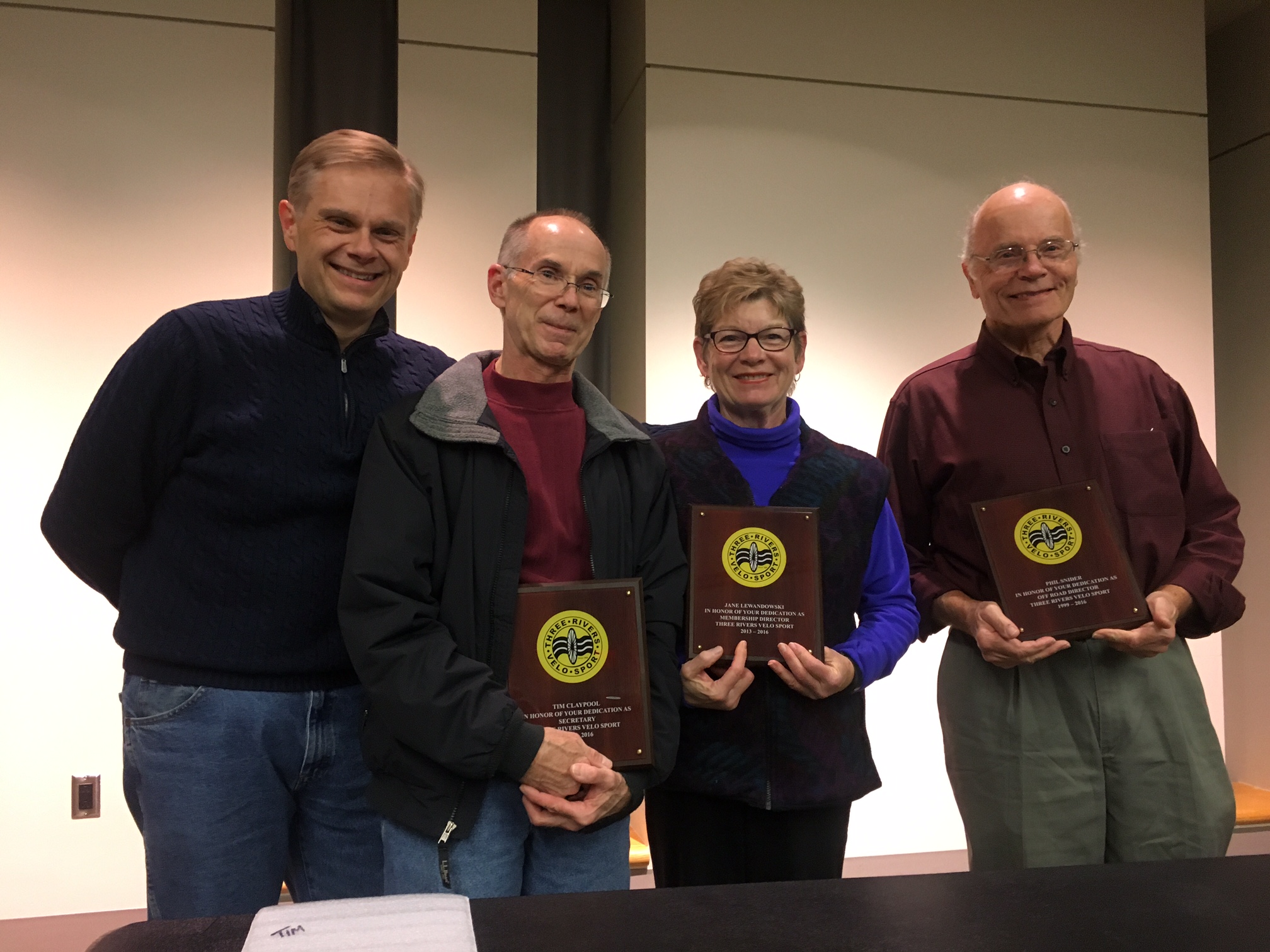 The theme of officers with a newer history with the club continues with Scott Tomsits, our newsletter editor. Scott started riding with the club in early 2015. I remember seeing him on weekend tours riding an upright bike and thinking, “that is extra work.” Yet, he came back week after week until he was engrained with the club and promoting our mission. He is always aware of being fair-minded to others and wanting to learn the finer techniques of cycling. At the end of 2016, he was time trialing (road bike) at our monthly event on highway 424. I look forward to Scott learning the trade of newsletter editor. I know he will be conscientious and determined to inform members on the monthly happens of 3RVS.

Randy Rozewicz has big shoes to fill. That statement is not to intimidate him, but to honor out-going off-road officer Phil Snider. Randy, new to the club, has been a frequent ridder on Phil’s adventures. Familiar with Franke trails and urban exploring, Randy’s enthusiasm for the bike was apparent at our January meeting. His bona fides show as a board member of NITRO (Northeast Indiana Trail Riding Organization). Phil was instrumental in bringing Randy to 3RVS and I know Randy is looking forward to continuing Phil’s good work.

New officers signify a change in leadership. I cannot say enough good things about the four out-going officers. In 2015, 3RVS honored Phil Snider with our Outstanding Leadership Award. His dedication has broadened the 3RVS footprint in our community. Membership officer, Jane Lewandowski, came on at a time when the office was in disarray due to health related issues of the past officer. She quickly organized the membership duties and her professionalism solidified the trust of the members with the club. As a long-time member, Jane understands to the history and tradition of 3RVS.

Tim Claypool’s dedication to 3RVS started many years ago and included significant dedication as organizer of the Chilly Challenge. When I started as president, January 2011, Tim was attending club meetings on personal interest. This devotion to monitor club direction applied when he stepped up as club secretary. His concise notes of long meetings were a great help to me and the other officers. Unfortunately, family health issues have limited Tim’s future involvement with the club. Family comes first despite our love of cycling. I wish him well.

Mike Heyes’ dedication to 3RVS spans decades. He has held numerous offices in the club. His visionary effort to start the club’s website twenty years ago when few were doing the same, has been a godsend. When the newsletter office opened in mid-year, Mike stepped forward and maintained the continuity of information flow. He added his own twist with an online format and expanded it with more items of interest. Mike’s stewardship ended with the New Year, but he continues his connection with the club as webmaster and Facebook administrator.

The four new officers have big shoes to fill. I have confidence that they will continue the tradition of good stewardship to the oldest and largest cycling club in Northeast Indiana. As officers, they will handle their specific duties and participate in club meetings. Their opinions and decisions will guide 3RVS. I am confident in their abilities and look forward to serving with them in 2017.