By Jennifer Altherr and Amy Copeland - May 2017

The first in a series of Destination Rides was held on April 22. Most people met at Starbucks at Coventry in Fort Wayne and carpooled to the beginning of the ride.

As the summer of 2015 got into full swing, I had been riding my Trek hybrid bicycle fairly religiously since the beginning of April. I was very happy moseying along taking pictures of lakes, sunrises and sunsets. I had done a couple of bike trails up in Michigan, I had even biked along the Mississippi and Missouri rivers while on vacation. Many of the people that I talked with in my travels had asked if I had ridden this or that event, I pretty much look at them with a blank stare because I had no idea what they were talking about.

Every January, Three Rivers Velo Sport holds officer elections for the coming year. The terms for each of the nine offices is one year. With the club’s formation in 1969, five decades of club members have guided 3RVS and maintained continuity for cycling enthusiasts in our community. Good stewardship is not as glamorous as creating something new. Yet, without this kind of dedication, volunteer organizations crumble and fall away. This past month, four new officers were elected to the board. Such turnover is unusual with a mature organization that is running smoothly. I see the turnover as a sign of enthusiasm from new membership in the last few years.

Thanks To Our 2016 Ride Leaders

Another riding season is in the books, and it's been a great one! Our rides owe their success in large part to the ride leaders who show up for each of the rides. They welcome riders, answer any questions, and start the rides on time. If there is an accident or mishap that involves injury to a club member, the ride leaders complete the appropriate paperwork for any insurance claims.

Read more: Thanks To Our 2016 Ride Leaders 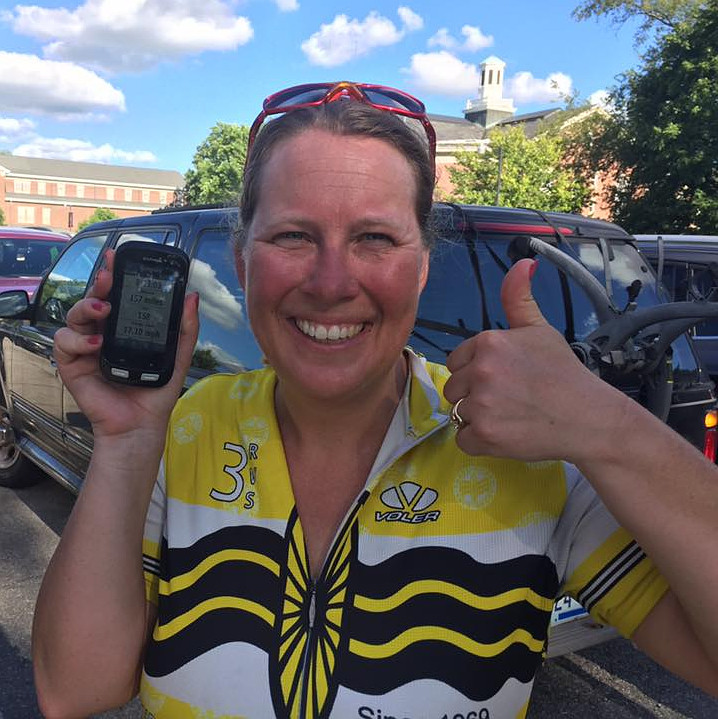 With a rocky start in the month of May finishing up in 6th place overall and 2nd place just 1373 points behind the Mind Brain Social Club in the Extra Large team category, the team continued to build in numbers and momentum and never looked back. By the end of June the team had taken the overall lead for the extra large team and held it for the remainder of the challenge, which ended September 30th, finishing 77,506 points ahead of the 2nd place MBSC team. The 99 member 3RVS team also finished in 4th place overall nationally against the top three teams each having 273 to 443 members.

The team point leader for the year was Steve Pequignot with a total of 14,414 points followed by Jeff Kenny with 10,846. Both gentlemen earned the coveted double diamond status for being over 10,000 points. Jody Thomas rounded out the top 3 for the gentlemen with a diamond level showing of 9,062 points. The top three ladies were Amy Copeland with 6982 points, Denise Snider with 6,119 points and Jennifer Altherr with 6,046 points all earning the diamond level.

Written by Ralph Goshorn and others

Ralph writes, "I have been using SILCA frame and floor bicycling pumps and other items for 33 years. I’m still buying SILCA stuff because not only do they work forever (I know this sounds like an advertisement) but they are just cool!"

"Silca was started around 1917 in Italy and the family sold the company to Joshua Poertner who has brought it to Indianapolis. I am thrilled with stuff! Its all high-end and I like to reward others and myself by buying items for gifts, some get used, others displayed as collector items."

Yesterday four friends and I took the train to Chicago and back using Amtrak's walk on bike service. The recently renovated train station at Waterloo is comfortable with a lounge, TV and restrooms.

ODRAM- One Day Ride Across Michigan

Written by Mona Will - September 2016

If you look at the map for this ride, it starts very near Lake Michigan in Montague and ends on the western most shores of Lake Huron at Bay City. From what little I know of the history of the ride, it started out as a completely unsupported ride. This means no planned sag stops or roving support vehicles to make sure any cyclists that are experiencing any major mechanical issues or physical issues are taken care. In the first years, this was the kind of ride that a handful of cyclists who had carefully planned the route earlier in the season would meet up early one morning, with snacks and tubes in the back of their jersey’s, and ride across the state, stopping in small towns enroute to replenish water supplies, food supplies, take bathroom breaks and work their way from one Great Lakes shoreline to another. Most likely hoping for the traditional west to east winds that would help push them to their destination. As with most exciting rides, word spread from one cyclist to another and the handful turned into a group large enough to need volunteers to handle cyclists and logistics.

After yesterdays RAIN ride I could not be more proud to be a member of 3RVS and see how well its riders and jersey is respected around the state.

It started in the parking lot before we even started riding. A gentlemen saw our jerseys in the lot and said, "Hey, you are that group that won the NBC challenge last year for the state of Indiana, how is this year going?".

He was part of the Team Cure Chasers who took 2nd in the state last year. He did not ride yesterday but was in a SAG vehicle that parked at several places along the route. When we would ride by and he saw the jerseys he called us out rang the cow bell and cheered on Three Rivers Velo sport for a good ride.

Riding To and Through Good Communities

From May through October, Three Rivers Velo Sport (3RVS) cycling club leads weekly weekend group rides (tours) through Northwest Ohio and Northeast Indiana. The organized rides start at a variety of locations in Allen County.  Supported by maps and a ride leader, the routes travel to some of our favorite places to stop so the riders can catch their breath, regroup, and replenish fluids.  A common expectation is to plan stops for special road snacks and treats.  For example, Antwerp has a roadside root beer stand, Monroeville has the Whippy Dip.  In Woodburn, the Marathon has the best air conditioned gas station to cool off on a hot day and the Hicksville Marathon stocks chocolate milk in the cooler, an essential cyclist’s recovery drink.

Read more: Riding To and Through Good Communities