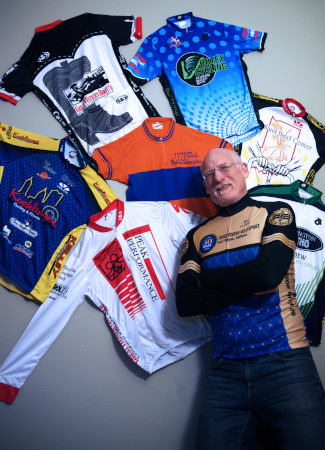 Several club members have commented that they have enjoyed reading stories about days gone by in cycling. I thought I would give it another shot with tales from the Major Taylor Velodrome.
The 1982 National Sports Festival had been awarded to Indianapolis with the condition that Indy must construct a velodrome in time for it to be used during the festival. As luck would have it the firm I worked for was chosen to design and engineer the bicycle facility. I was chosen along with a transportation engineer to visit several velodromes around the country. My job was to ride the tracks and report what was good and bad about each of them. That was the best assignment ever until…wait for it…until the track was being poured and they needed somebody to test ride the track! I was on the track site for a couple of weeks. I was inspecting joints, running a level everywhere to make certain that there were no high or low spots and most importantly making sure that the transition from the 28 degree track banking to the apron was as smooth as possible.

There were some other perks that went along with this job. One of them was that I lived within a couple of miles of the track. As construction wound down I loaded my daughter and our bikes into the car and headed out. My daughter became the first female to ride on the Major Taylor Velodrome on her…wait for it…big wheel! She did a full kilo. Not too bad for a three year old! She couldn’t ride on the steep banking because her plastic wheels just slid down to the apron but she managed the straights pretty well.

Another perk that I never saw coming involved Tom Carnegie who was the track announcer at the Motor Speedway and the Sports Director for Channel 6 News. Somehow Channel 6 had gotten my name and they called to see if I would be interested in doing the color commentary for the races at the velodrome during the festival. I hesitated for about one half of a second before I said yes. I kind of forgot that I had stage fright. I probably should have told them that. As it turned out all I had to do was interview fellow cyclists. They were all way out of my league but a cyclist is a cyclist and I had a ball asking them questions about their training and goals they had for the year and for the upcoming Olympics. I remember talking with the wonder kid, Steve Hegg, about doing both the summer and winter games (he was also a top flight downhill skier). He said that he would like to but both of his coaches were against it.

Each day I would record a short wrap-up of activities at the velodrome. Everyone in Indy is familiar with Tom Carnegie’s catch phrase at the Speedway. So I thought what would be a better way to announce a new record so I said “Leonard Nitz crossed the finish line and set AAAA NEWWWW TRACKKKK RECORDDDD!!!!!!” Within two minutes I was given the word that I was never to say that again. You can believe that I never did.